Second day we sailed into Bodrum in Turkey and docked at about 10:00am. We’d chosen to go on the arranged tour of the castle and the afternoon gullet cruise so we assembled at 10:30 and filed of the jetty, through the customs terminal (empty as it was – you don’t need passports or visas etc as a day cruiser) and onto a little fleet of small buses, sorted by those with either Greek or English speaking guides. Although you can see the castle close by from the ship, it’s on the other side of the harbour so the transport is necessary even though you could do without the wait as they finish getting everyone on board with little of no air-con running. However that’s a small gripe indeed. A quick trip round to the main harbour front takes about 15 mins with the heavy traffic in Bodrum centre (it’s about a kilometre walk along the front to the town centre from the boat or there’s a stand of taxis waiting to take you for 6 euros too) and we all get off and walk along the harbour front past the gullets lined up to the castle entrance. 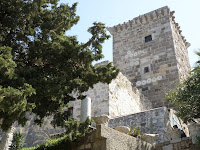 Now the castle is most impressive and I believe it’s another of those “Castles of the Knights of St. John” that seem to dot many places in this neck of the woods, but more about the history of the place I’m afraid I can’t tell you, for although the guide was a very nice man (he could be in the AA) his voice was quite quiet, he didn’t bother to wait for everyone to arrive before delivering his talks whenever he stopped, and his English was a tad pigeon (although it’s hard to complain given my grasp on any other language). Still I got the gist that several people had occupied it from time to time, bits of it are built from the original stones from the Mausoleum of Halicarnassus (one of those seven wonders of the ancient world – even if it is the one most people have never heard of), and there were definitely crusaders there at some point. There are enough towers, fortifications, a mosque minaret, steps and walls to keep even the most avid knight happy miles from his round table, and I really enjoyed looking round the place even after I’d given up trying to listen to the guide. However in addition to the castle itself there’s also a few little treasures inside for those who want more than rocks piled up in a fortification style, as this is the place where a lot of the undersea archaeology is displayed. One room contains lots of glassware tastefully lit recovered from beneath the waves, another contains a mock up of a section of ancient galley showing how the many amphora that are also on display in the castle grounds would have been stored and transported originally, and a third shows the remains of a bronze age (that’s about 1500BC to the layman – or very old indeed t you and me) ship and cargo of metal ingots and amphora. Even if you can’t make out much of the ship itself (another mock up on the wall above the wreck gives you an idea of what it would have looked like) it’s interesting purely from the perspective that this is the oldest wreck ever found to date anywhere.
There is also in what is called the English Tower a variety of interesting objects from lion heads and model ships, to old armour and pirate flags which is worth a little look too. By the time you get to the Snake tower (so called for the snake carving on the wall) which contains more amphora, you will have to make your own mind up as I was too amphoraed out to even stick my head through the door.
In the entrance courtyard to the castle is a little snack bar and souvenir shop, but the guide barely gives you time to go to the loo and grab a take away bottle of water, so unless you are doing the castle by your self, don’t settle yourself down with a Tom Collins to sip.
On from the Castle we got back on the bus and headed for the jewellery shop. Interesting this tour didn’t even try to dress it up as anything other than the “here’s where we do our best to sell expensive stuff to the captive audience of tourists” bit of the tour. The jewellery was lovely I’m sure and if you want to shop for gold I’m sure you could haggle a good price if you try hard enough, but the army of salesmen that hover over you whenever you catch eye contact with 14 carat ring, is irritating enough to me that I was hunting for the exit sign a few nanoseconds after entering. Of course the exit is in the far corner of the shop (I imagine they might actually lock the entrance doors behind you once you’re in) and it routes through the attached souvenir shop to give them a last chance at trying to get cash from the cheapskates on the tour that can’t afford gold. 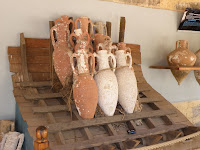 The worst point about this stop was that not only was it in the middle of nowhere as they normally are to stop you wandering off, but once you left and were waiting for the others to finish inside there was absolutely nowhere to sit down or get some shade. Luckily the sun was at an angle that the wall of the building afforded some shade, but the wait was just very uncomfortable.
Finally back on the bus and we head back to the harbour front via a short stop at a panoramic view point next to the windmills on the hill for people to take photos, and we waved goodbye to our shoes as we boarded our gullets. I’m not quite sure why we couldn’t have shoes on the boats but it was no big deal apart for a few bear-sole-burning moments on the dockside until you were on board.
The boat then takes you out to a nice calm bay where the water is clear for a swim. As you have a first dip, lunch is prepared (long awaited it has to be said if you didn't have breakfast on board as it's now getting on for 3pm) which consists of some breaded chicken on sticks, pasta in a tomato sauce, boiled potatoes with rosemary(?) and some salad. Drinks are available to buy on board and our bill for 2 cans beers & 2 ice teas was 8 euros.
Another swim after lunch and you then move on to another spot and are encouraged to indulge in a third dip before the gulet finally sails on to the dock side next to EasyCruise.
To get back to the ship you pass through the customs block where theres a security check of your hand luggage where they ask to see your key card.
The excursion is, I think one of the better value ones at 40 euros per person for pretty much the whole day. The castle and the gulet trip are really worth while, whereas the jewelery shop is just to be endured.
What can I say about the rest of Bodrum? Well not much to be honest. We took a taxi back into town and after a bit of a wander round the shopping streets stopped for what would have been a very pleasant meal folled by some hubbly-bubbly pipe smoking on the beach front, had it not been for the fact we were completely ripped off when the bill came. So as warning, always check the price of anything before ordering, and make sure you are very clear about what you have ordered before the friendly waiter leaves your table. At this restaurant (called 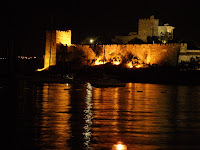 'Hey Yavrum Hey' so you know to avoid it) the starters came on a very large tray where you just picked off the dishes you want without any menu showing you there price, we ordered a bottle of wine and recieved one cloudy with sediment and were charged 35 euros for it as they claimed they only serve fine wine. We ended up paying 117 euros for the meal and pipe which frankly ruined what would otherwise have been a pleasant evening.
Sadly just like several other people's comments I overheard on board, we were glad to be leaving Turkey behind and sailing back to Greece in the morning.
If you are into the Bodrum night life & clubs, then the ship's schedule is generous in giving you until 7:30 in the morning before you have to be back on board.
For me however, I was happy to sleep those early hours away and wake up in Kos.
Posted by GreedyGreen at 20:07