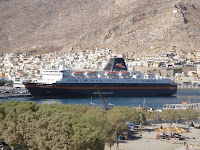 EasyCruise Life is a converted ferry, and I don’t know how much conversion it took but you’ll actually find little more facilities on board as you would a normal long distance ferry. For instance I went on the Aberdeen to Shetland ferry a few years back and even that had a little cinema on board – not so with EasyCruise. What you do get is a main bar and restaurant area which opens out at the back of the boat past the small swimming pool to about 15 or so tables and chairs on deck looking out over the stern of the ship. Above this on the next deck is an area of sun beds that surround an opening that looks down onto the pool below and a further sunbed area climbing up onto the deck about that. The sun beds are big padded chucky affairs and look relatively comfortable. There’s also a row of bar stools to either side of the pool.
Inside just beyond the main bar is the ‘Chill Out’ bar along the starboard side of the ship were a couple of TV’s play mostly the CNN channel and where they do a happy hour of half price drinks at about 7pm.
On the first sunbed deck (deck 7) there’s also a gym (free to use) and a health and beauty salon (treatments to pay for). There's also a gift/duty free shop that's only open while the ship is sailing. Hence of course it's technically not in the EU so the ciggarettes really are duty free and a snip at 15 euros for 200 or 25 euros for 400. Oh, yes and they also sell some perfume, t-shirts and jewelery and stuff....and did I mention 400 fags for 25 euros...?
Apart from that there’s reception on deck 5 and lots of cabins.
Now I’m not complaining about the lack of cinemas, different restaurants, and climbing walls etc. that you get on the big cruise ships as EasyCruise is pitched at a different level. This is no frills cruising and the price we paid matched that, although with the prices quoted for next year this may be a different story. The main point about the cruise itinerary is that you don’t leave the places you visit until late in the evening or even well into the next morning, but always arrive either mid morning or (on one occasion) at 2pm at the latest.
We’d read about problems on the earlier cruises with service in the restaurant, but the few times we did use it we didn’t notice any particular problem. Occasionally you waited a while for a drinks waitress to come by if you were sat out back, but if that was a bother you could always rise off your lazy ass and walk to the bar. In general the waitresses (mainly Russian I think) were excellent and friendly and I had no complaints about service.
Our cabin staff was also a cheerful Russian lady who always had a knack of arriving to do something in the cabin when we were there, but she was such a happy sole and quite ready to come back later if you asked. The crew overseer seemed a little more miserable and I think our cabin lady got some stick off her from time to time, poor lass. 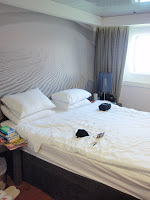 The cabin itself was a superior double although looking at the deck plan I think we got the smallest ‘superior’ room they had as it was little bigger than the standard double, with just enough extra space to put a sofa in the room. However it was plenty big enough for the both of us, and the bed was wide enough as it’s effectively two singles pushed together. For reference the number was 5106 on the port side towards the bow (left towards the pointy end). The main problem with the cabin is the layout with no sockets anywhere near the mirror; a full length one right next to the cabin door. For the ladies that want somewhere to prepare, it’s fairly difficult unless your hair care electricals have very long leads. The nearest socket was on the other side of the cabin next to the bed. I think a better layout would have been to ditch the sofa and put in a small dressing table (with mirror and socket) and a single comfy chair instead. 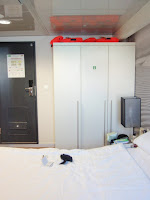 The sockets were standard Euro twin round pin ones by the way. However none of these cabin gripes were insurmountable (my wife’s hairstraighters did indeed have a very long lead) and we were happy enough with the accommodation. It was relatively clean, although a little more attention under the bed and behind the sofa (came across a few old peanuts there) could have been in order.
The bathroom has an airline style toilet with the 'suck out like a vacuum' flush, and the shower has a inch or two high ridge to stop the water spilling into the rest of the bathroom. The effectiveness of this ridge seemed to depend which way the ship was leaning on any particular day as sometimes the water built up and overflowed a little and other day it pooled against the wall nearer the drain. Again not a big problem if some does spill over as there’s no way unless you leave the curtain drawn and aim the shower hose out the door that any water will get out into the main cabin area.
If you want to wash your smalls then an outside cabin is useful as when the sun hits that side of the ship you can dry off some small items on the window ledge. There is also a laundry service on board (24 hour for return of items) with a shirt costing 3 euros or a bag of up to 8 items costing 18 euros. Too pricy for a cheapskate like myself.
Outside on the ship you can walk right round on deck 7, dropping down round under the bridge a level to a balcony facing forward, if you want to see where you are going. There’s shoebox sized wooden boxes at regular intervals on the side outside decks which are ashtrays for the smokers (the top hinges up) and there’s ashtrays available in the bar/pool/rear deck areas. You can't smoke in your cabin though or in the chill out bar.
It might seem as if I've concentrated on the bad points of the ship, but in reality I thoroughly enjoyed my week 'cruising with Stelios'. The rooms were OK, the service was fine, the itinerary was great, and the cruise director, Anita, was full of energy and very helpful. I can't comment much on the food as we used that service very little, only having the buffet on the first night (there's little choice as you're at sea that evening) and once more for breakfast. Those two times the food was fine, in nothing exceptional.
At the end of the cruise you can opt to take the organised transfer to Athens airport which leaves at 9 in the morning and costs 18 euros per person. probably close to what a cab would cost for two people but for convenience I think was well priced. We used it and it was a just over an hour to get back although for Athens I think the traffic was fairly light.
The best point by far was the time spent on the islands and for some this indeed may be the selling factor that still makes it worth the higher prices that are now being charged. I problaby won't pay the extra to go again but I'm very glad to have got in there early while the prices were lower and the half board optional. I had a wonderful time and will be keeping a keen eye out for any early deals if Stelios gets another ship to replace EasyCruise One at any point.
Posted by GreedyGreen at 20:02

Thank you for your fabulous blog!! We're off on Thursday to Athens then embark on the cruise Saturday. We also got it at the bargain price, so although my expectations were pretty low, I admit I was still a little apprehensive. But not now, I'm really excited, thank you!! :-)

Thanks ladyborg - I'm glad the blog helped. Hope you enjoy your holiday.