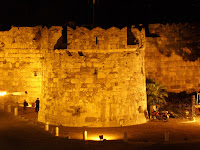 At about 10am we docked in Kos as it's only a short hop across the water from Bodrum, and the jetty is right next to the castle in Kos town, so it's a short stroll along the side of the castle wall and your in town which is bustling with tourists. We'd been to Kos before for a few weeks and so we had a fairly lazy day, but if it's your first time don't miss a look around the castle especially as it's so close.
The town is not particularly pretty in as you approach from the sea in the way that the harbour of Hydra or the cliffs of Santorini are, but once in the town it's a lovely maze of shopping streets and bars and tavernas that are mixed in among the bits of ancient ruins of the agora and a theatre and hug around the castle, which I think gives Kos town it's own unique charm. 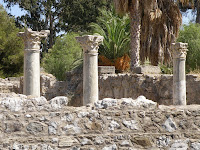 Yes it's a tourist place, but the reason why many tourist places have grown up is because they occupy some beautiful area and I think Kos town is one of those. There are plenty of places to eat and drink to choose from but for location some of my favourite are along a quiet road that runs along the side of the agora with are the bars/tavernas on one side and a view of the ruins on the other. The road is closed to traffic (apart from the obligatory motorbike - but there's nowhere near the volume of motorbike traffic as Kalymnos suffers) so it's a lovely relaxing area of town. 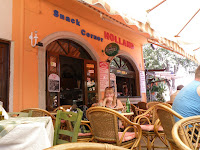 We stopped off for lunch here at the "Snack Bar Holland" which rather obviously caters for the Dutch visitor missing their krokets and bitterbalen. It's run by a friendly Dutch lady and the Hawai Burger was delicious if messy with all the sauces dripping down my fingers as it was wolfed down.
The main square is a busy place with bars surrounding it where we stopped to people watch with a coffee and toastie in the morning. In the middle is an old mosque which has now been converted with souvenir shops built into it. I wondered if Mohamed might on his return borrow a line off Jesus regarding the house of Allah being turned into a den of thieves.
There's also a little indoor market just on the square where the wonderful smells of all the herbs and spices on sale fills the air. 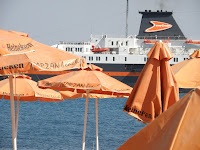 For most of the afternoon we spent lounging at the "Tarzan Bar" on the main beach. You need to walk to the right all the way round the almost circular harbour from the castle jetty to get to the beach but it's really not far. The bar is a strange mix in it's themes, being named Tarzan, with a cactus on the sign, a predominant orange colour, and decorated with surf boards. However, a pleasant afternoon was whiled away here drinking ouzo and listening to the mix of dance music being pumped out towards the beach.
For the evening we returned to an Italian restaurant that we had visited on our previous holiday in Kos where we remembered having had wonderful crepes. The restaurant is called "Otto e Mezzo" (tel: 22420 20069) and is on Apellou Street one of the main narrow shopping streets.
I have a soft spot for Kos Town as it's different round each corner and there's a lot in a small area to keep you interested. We left walking past the floodlit castle, after a few cocktails at the Limani bar, a small friendly spot with brick benches outside covered in rugs and cushions to sit on. It's set back from the harbour front but still with a view over a small square to the ships. In the square we were treated to an impromptu fire juggling show to round off a very happy day in Kos Town.
Posted by GreedyGreen at 20:06