At Mykonos we had opted for the excursion to neighbouring Delos for guided tour of the ruins there. From reading forums and other internet reviews of the cruise we had the impression that it would be very tight trying to get to Delos under your own steam as the last boat to Delos is only just caught by the EasyCruise tour. However on our trip the ship docked by 10:00am and the shuttle bus started at ten past, which cost 8 euros per person for unlimited use between the ship at Mykonos Town a good 2 km from the new port where the ship docks. As the tour only sets off at 10:30am from the ship, I think there would have been ample time for someone to nip down earlier on the shuttle and get a ticket for the Delos boat at 11:00am. Having said that there’s not a huge mark-up on the tour price so I was quite happy to have it all organised for me.
I say that the Shuttle bus takes you to Mykonos town, but it actually drops you at the old port so there’s about 400m into the town itself. We had about a 10 minute walk around the harbour front to the Delos ferry (giving us tie to nip into a shop for a couple of vanilla croissants for breakfast) which we boarded for a half hour crossing on a fair swell that made the boat sway quite considerably – sick bags are provided if required.
Delos itself is uninhabited apart from people working on the site and is fairly devoid of any shade, so a hat and generous quantities of sun screen are a particularly good choice as the guided tour takes a little under 2 hours. 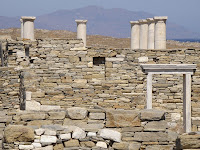 The site itself covers quite a large area and we were first shown round the domestic district with many twisting streets and houses a lot of which still have walls above head height so you get some impression of what the place may have been like. Our guide, Joanna, was very knowledgeable and was good to wait until everyone was present before starting to speak at each stop although some impatience did start to show when the party got slower at catching up (understandable as she has to complete the tour and still give you time to catch the 1:30pm ferry back). 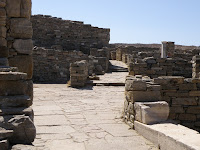 This may have been as we were a very large group, which in turn could have been because you were let into the site based on trust – at the gate only EasyCruise people were let through to begin with, but rather than showing your ticket the guy at the gate simple asked “EasyCruise?” and if you said “yes” you were let through. So I have a hunch there might have been a few more than ought to have been there. Anyway, there’s lots to see, from the House of Dionysus (the grandest of the houses) and the theatre with it’s rainwater gullies channelling water to the arched public cistern, to the temple district with the foundation level remains of the temples to Apollo and other gods and the famous 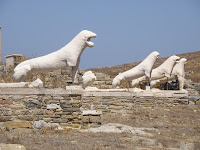 lion statues which is where the tour concludes. It was a fascinating tour and it’s a place that I’d like to go back to again on my own to have a wander about with out the crowd, now that I’ve done the guided tour. If you have the time and inclination you can stay on the island longer and catch the 15:30 last ferry back to Mykonos but we ambled back down from the lion precinct to the 13:30 boat as in the heat it is quite draining and also with only a day in each place we wanted to see a bit of Mykonos Town itself in the daylight. The other downside to this plan of course is that the 13:30 ferry is fairly packed so we, and many others, didn’t get a seat for the return journey.
So to Mykonos itself…yes, it’s pretty and yes it’s got a pelican, but for me this was my least favourite of the Greek Islands on the trip (Bodrum being the only place I disliked more for obvious being ripped off reasons). It seems like Mykonos Town is believing it’s own hype, and the prices are somewhat astronomical. At first I thought prices on board ship were expensive, but that’s just peanuts to Mykonos. We had lunch at an unremarkable little bar that was whitewashed inside with a cute little balcony overlooking the sea. It was minimalist elegance inside which meant it echoed a lot and it was full of people with much more money to spend on their clothing labels than I, which seemed to be a theme to much of the town. The whole place felt like somewhere to ‘be seen’ rather than the Greece I am used to. Don’t get me wrong, I normally visit tourist destinations in Greece but if you avoid the Malia, Lagana or Faliraki type resorts, most spots still have something identifiable Greek about the culture there. Mykonos seems to have lost this and pretty twisty turning white and blue alleyways aside is characterless in it’s desire to be trendy. 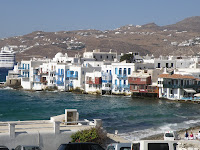 We came back into town in the evening and eat down in ‘little Venice’ at the Alefkandra Taverna so called for the Greek name for the area which was surprisingly more reasonably priced for the town, having previously sat down at a bar further into town and left sharply as soon as we looked at the drinks menu with cocktails at 1 euro shy of 20 – compare that to the 5.50 at the harbour front in Kos Town. 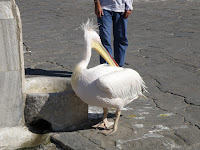 For me the best place in Mykonos is the harbour front just round from the old harbour where we sat with an ouzo or two looking out to the boats on the jetty and watching the tourists try to pat the pelican without getting catch by that rather large beak
And so, Gay Love Paradise Mykonos, is probably a bit like marmite – your either going to love it or hate it – for me, someone used to shopping at Matalan and Aldi, rather than designer boutiques and the Harrods Food Hall, it’s somewhere I’ve no real desire to return to. One last example, we looked in a shop window at a long sleeved top that had caught my wife’s eye – for something little more than a t-shirt with some sparklely bits sewn on the price tag was 420 euros, which as one of the waitresses on the boat said was about her whole wage. If you are used to paying this much for clothes, you might like Mykonos.
Posted by GreedyGreen at 20:04