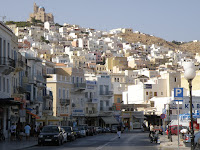 Syros is the last island to be visited on the cruise and most of the crew seem to favour it. The main town of Ermoupoli stretches out either side of a rocky bar of land upon the end of which the jetty sticks out into the sea. The harbour front on the left side is crowded with bars and cafes whose tables occupy the space right on the dock edge across the main road from the bars themselves. The town itself spreads up the hillside to the church at the top of Ano Syros with mainly Venetian styled architecture the elegance of which it at odds with the working nature and traffic of the town together with the 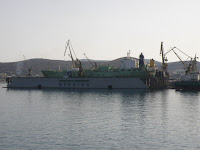 shipyards to the far left of the harbour bay. The town to the right of the jetty rises with the rocks and is difficult to get to as many of the roads you expect to lead over the headland to this side end up in dead ends – however more of that later.
About a ten minute walk around the harbour to the left brings you to the bus station opposite “Goodys” the burger chain (you can easily make this out from the boat), from where you can get buses that travel round the island. We decided not to share the bus with the horde of screaming school kids who had timed there travel at the same time as us and splashed out on a taxi (a taxi rank is about half way round to thebus station from the ship) which cost us 7 euros for a trip to Galissa Beach (the bus on the return was 1.40 euro each by comparison).
Galissa beach is supposedly the best beach on the island and it was a lovely spot to spend a few hours in the afternoon, being nice to get away for once from the big towns where you dock – Ermoupoli being one of the bigger towns. 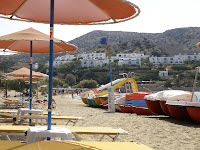 There a handful of quiet tavernas on the road through the village and a bar or two down closer to the sandy beach itself. The beach is very shallow going out a longway and is relatively rock free so ideal is you have children with you and 2 sun beds and an umbrella will cost you 7 euros (you even get a receipt). The only downside is the number of ciggie butts littering the sand which is doubly a shame as each umbrella has an ashtray attached to the pole. We had some of the nicest cheese pies at one of the beach front bars and a lazy few hours here to recharge the batteries a bit. One word of warning is that the umbrella material is not solid so lets through some sunlight, so it’s still possible to burn if you spend a long time there even when you think you are in the shade.
The buses run every hour or more in high season and as long as you get one going the right way will take about 15 minutes to get back to Ermoupoli. Get on the wrong one and you’ll still arrive but 45 minutes later instead. Tickets are bought on the bus rather than at a ticket office.
Back in town we performed the 3 S’s on board headed out again for dinner. As we were due back on board for 21:30 for a 22:00 departure, we went out a little earlier than usual but this ended up being a good thing as I will explain in a moment. We first had a drink on one of the harbour front café’s (picked for the comfiest looking of the chairs and called “Okio”) where our 2 ouzos were supplied with a complimentary little plate of nibbles consisting of cucumber and carrots in vinegar, little crunchy breadlet bites and a flavoured mayonnaise style dip which was very much appreciated. We then moved on to find a restaurant called Thalami (web:http://www.thalami-restaurant.gr/ email:info@thalami.gr) which was mentioned in the Lonely Planet guide. This is when we ended up head up many dead ends trying to get over to the other side of town until we eventually happened upon the place and were rewarded with possibly the most delightful setting for a Taverna of the entire holiday. The guide had mentioned you eat from a balcony overlooking the bay to the right of the headland, but until you sit down there you won’t appreciate how beautiful the view is. As I mentioned earlier it was fortunate we went out a little earlier to eat as we got to see this in the daylight and after dark. 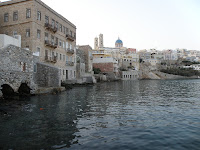 The taverna is at one end of the bay where all the Venetian houses cling to the rock side. One large building to the left of the restaurant is built on old medieval looking arches into which the water laps, and rising above the scene is the roof and towers of the magnificent Catherdral with it’s cobalt dome. As light fades this is all lit up and we spent a happy evening gazing out at the view while enjoying wonderful seafood. We had white bait and batter fried courgettes to start and grilled squid and a seafood spaghetti from our main course and it was all delicious. 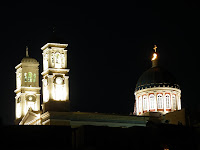 If you want to try this place go in the evening as others tried it for lunch, found it closed and so missed out on something special. As we got chatting to a lovely Irish couple who have bought a little villa on the island in their retirement, it was with great reluctance we had to leave the place to get back aboard ship for our return to Piraeus overnight.
I think I have to agree with the crew as I think this was a cruise where the best was saved to last and Syros was a completely enchanting island even with the noisy bustle of the working town. Go there.
Posted by GreedyGreen at 20:03